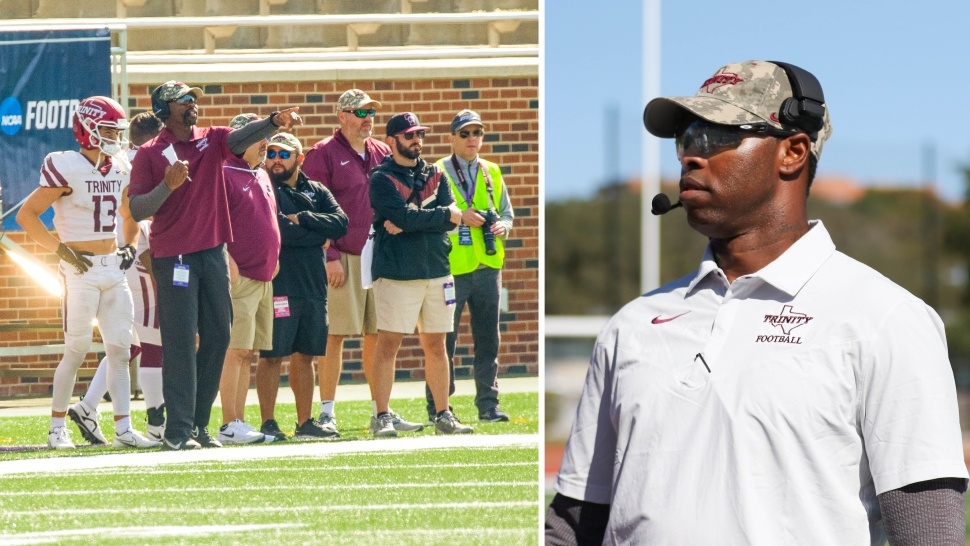 Marcus Coleman is no stranger to the world of the National Football League (NFL). After playing for the New York Jets, Houston Texans, and Dallas Cowboys for more than 11 seasons, he brought his knowledge of professional football into his coaching career at Trinity University as the assistant football coach and special teams coordinator.

This summer, Coleman was selected to participate in the Bill Walsh Diversity Coaching Fellowship. The fellowship gave eight minority coaches the chance to work with the Jacksonville Jaguars coaching staff and other NFL coaches to gain the experience and skills necessary to eventually be hired by the NFL.

“To be in front of coaches that you’ve been coached by and recognizable coaches throughout the league is a great experience,” Coleman says. “A lot of the coaches, especially on the staff in Jacksonville, have been coaching a long time. Some of them have won Super Bowls and divisional championships.”

Coleman and the other fellows experienced the logistics of the NFL during the Jaguar’s training camp. Here, the fellows were given an intimate look into the workings of the NFL, from the administrative aspects to relationship building.

Coleman felt right at home among the experienced coaches and successful players. “I was very comfortable there. As a former player, I understood the environment and what it was like. So, I jumped right in and got to work—it was a blast,” he says.

Coleman isn’t the only Trinity coach who has received this fellowship. Former assistant coach Adam McGuire held the same fellowship in 2019, learning under the Minnesota Vikings and the late Adam Zimmer ’06, a former Trinity football player.

Coleman applied the knowledge he gained from this fellowship to game day with the Trinity Tigers this past fall. Trinity’s football team capped off its 2022 season as Southern Athletic Association conference champions, with its first playoff win in 20 years.

“The more that I learn as a coach, the more that I can pass on to my players, the better it is for them,” Coleman says. “You’re always trying to absorb something. The things that I learned there, I can bring back here.”