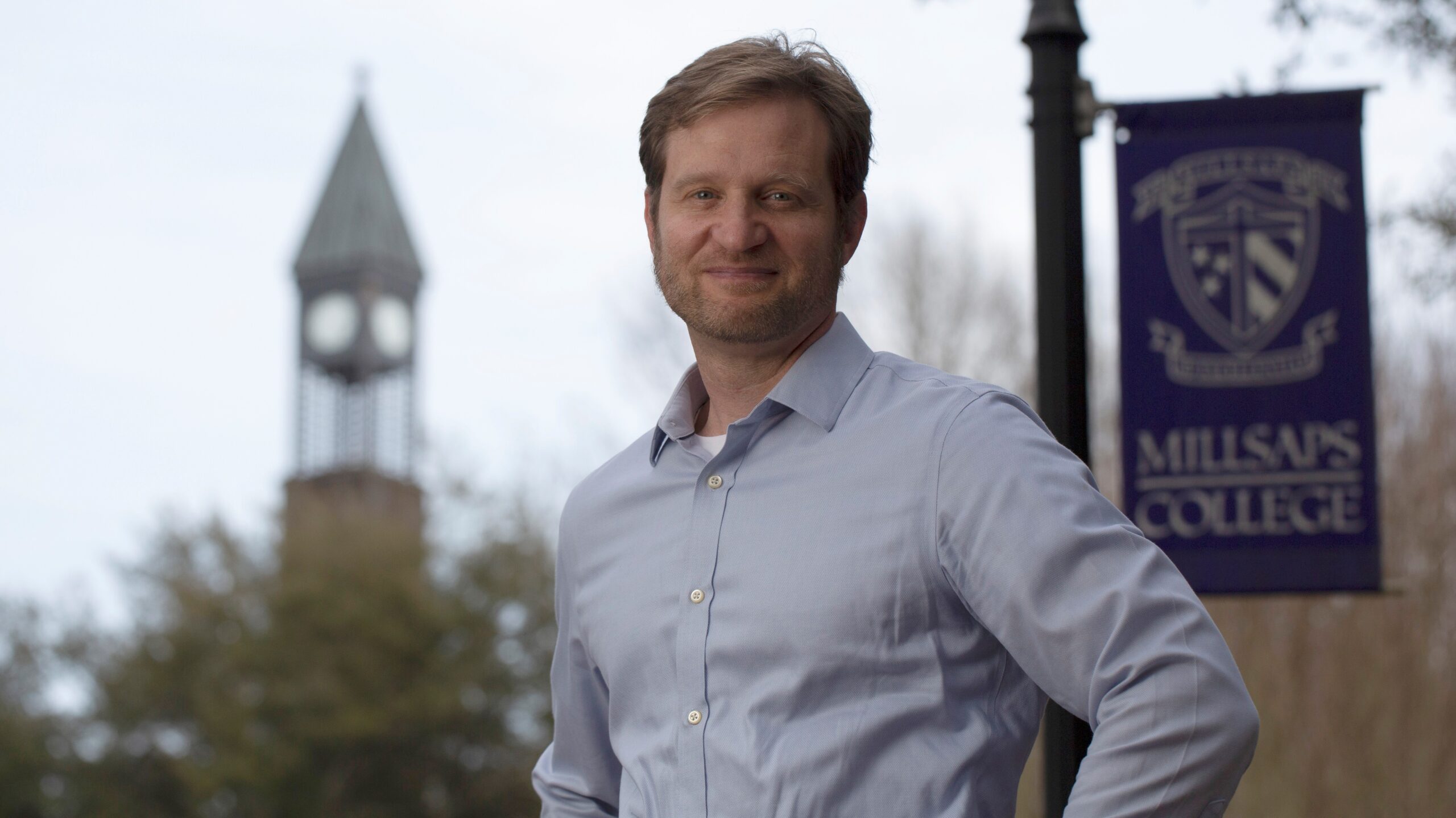 The U.S. Department of State, the J. William Fulbright Foreign Scholarship Board and the Board of Directors of the Fulbright Finland Foundation in Helsinki have selected Millsaps Associate Professor Peter Friedrich for the Seeking Solutions to Global Challenges Award. The new award, created on the 75th anniversary of the Fulbright Program, will bring Friedrich to Finland for five months in partnership with Åbo Akademi University in the city of Turku. Friedrich’s winning project, “Dramatic Entrances,” uses theatre to broker partnerships between college students and members of migrant communities.

“I am so honored to be the latest representative from Millsaps College on the Fulbright’s global stage,” says Friedrich. “Being summoned to Finland to help solve the world’s problems sounds like a storyline from The Avengers. But there’s no denying the problems we face today are real-life monsters. They’re immense, complex and heartbreakingly divisive. They drive us straight under the covers, watching a Netflix show we don’t even like — anything to escape. But I believe today’s college students, central to this project, have seen enough of that, and have the precise superpowers to turn things around for all of us.”

Friedrich brings a long history of working with second-language and under-represented populations to produce original devised theatre, created by the cast of performers to meet the various needs of a community. From 2008-2013, he taught at the American University of Iraq-Sulaimani, primarily working with Kurdish and Arab students. In 2012, he directed a multi-lingual Shakespeare production with student actors who performed at the invitation of the Oregon Shakespeare Festival, winning the 2013 Contribution to the Field Award from the American Conservatory Theatre.

Since 2014, Friedrich has led Millsaps students in the production of their own devised theatre programs, in which they have written more than 200 short plays on race, class, sexuality, ability and religion in the Deep South. He has also produced devised theatre with individuals incarcerated at the United States Penitentiary in Yazoo City, Mississippi, earned three awards from the Kennedy Center American College Theatre Festival, and received recognition from the Ellen DeGeneres Show for innovation during the pandemic. Most recently, he collaborated with Millsaps athletics to create Major Mic Madness, a socially-distanced singing competition under the lights at Harper Davis Field, complete with backup dancers, fireworks and a jumbotron screen.

“This is a tremendous honor for Peter, and we are proud of him and the creative and distinctive work he has done with our students here at Millsaps,” Pearigen said. “I know the students and communities with which he will be working in Finland will long remember and appreciate the value of his passion for bringing people together.”

Friedrich’s work is eagerly anticipated by his partners at Åbo Akademi University.

“Peter’s success pleases me greatly, but it does not surprise me,” said Jason Finch, associate professor of English Language and Literature at Åbo Akademi. “The depth of his social engagement and the liberating aspects of his teaching became even clearer to me than they had previously been.”

Friedrich’s work at Millsaps has earned praise from his colleagues as well.

“Whether Peter is producing theatre on serious issues of social justice and racism or bringing football players together to interpret Shakespeare in an improv setting, he never fails to fully engage his actors or capture the attention of his audience,” said Dr. S. Keith Dunn, provost and dean of Millsaps.

The selection of Friedrich as a Fulbright Scholar continues a long and proud tradition at Millsaps College, which has seen Fulbright awards presented to four students in the past five years. Since 1959, Fulbright recipients from the college have studied and taught in the former West Germany, Austria, India, Mexico, Albania, Jordan, Bangladesh, Poland, Georgia, Spain, Taiwan, Russia and Mexico. Dr. Lynn Raley, associate professor of music at Millsaps, is also a Fulbright Scholar, and taught at the National Chiao Tung University in Taiwan in 2012-13.

The Fulbright Program is the flagship international educational exchange program sponsored by the U.S. government and is designed to forge lasting connections between the people of the United States and the people of other countries, counter misunderstandings, and help people and nations work together toward common goals. Since its establishment in 1946, the Fulbright Program has enabled more than 390,000 dedicated and accomplished students, scholars, artists, teachers, and professionals of all backgrounds to study, teach and conduct research, exchange ideas, and find solutions to shared international concerns. The Fulbright Program is funded through an annual appropriation made by the U.S. Congress to the U.S. Department of State. Participating governments and host institutions, corporations, and foundations around the world also provide direct and indirect support to the Program, which operates in more than 160 countries worldwide.

For further information about the Fulbright Program or the U.S. Department of State, please visit http://eca.state.gov/fulbright or contact the Bureau of Educational and Cultural Affairs Press Office by telephone 202-632-6452 or e-mail ECA-Press@state.gov.